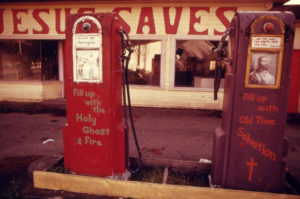 In 1973, AMERICA WAS OUT OF GAS!  This gas station in Potlach, Washington turned their gas station into a religious meeting hall. The caption might have read, “People do not live by gas alone, but by every word that comes from the mouth of God”.

In 1973, I drove a forest green ‘68 Volkswagen Beetle. It wasn’t luxurious, nor comfortable, or have air conditioning, but I still loved my car!  It didn’t take much to fill it up either, nor was it expensive (relatively speaking). With gas prices at 25 cents to 31 cents a gallon, who cared if your car got less than 13 miles a gallon anyway.

But what good was it if you couldn’t get gas?  In October of 1973, an oil embargo crisis caused by the Organization of Arab Petroleum Exporting Countries, tested people’s patience to no end.  All oil exports to America were halted, and gas prices shot up, on average, to 38.5 cents a gallon. Odd-even rationing was mandated, meaning if the last digit of your license plate was even you could only get gas on even-numbered days.

If you had to wait at the pumps to fill up your tank, y 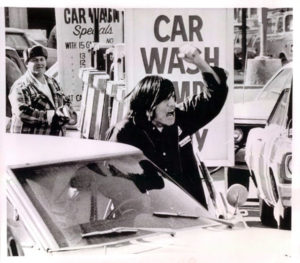 ou hoped that they did not run out of gas before it was your turn. Some gas stations posted flags where green meant they had gas, and red meant that they were out of gas.

Tempers ran hot.  Fights broke out with customers who tried cutting in the line. And it was common for thieves to siphon your gas tank if they couldn’t get any at the pump.

In 1973, the mobile phone was invented, but most people would not have owned one, and would not have had the distraction of talking on the phone or texting to pass the time. So maybe you brought a good book to read. 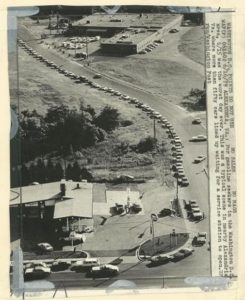 Or if you were in college, like me, you might have used the time to study. As I was a music major in college, it was impractical for me to practice my flute in the car, so I brought my drum sticks. If you just so happened to be in line with me, you might have observed me practicing rudimentary flams, drags, and paradiddles (Right-Left-Right-Right, Left-Right-Left-Left) on the dashboard of my car. Banging on the dashboard (same cathartic effect that screaming into a pillow has) also tended to relieve my stress of having to wait in around-the-block lines with waits of 1 to 2 hours, especially when you were soooooooo on the brink of losing it. Streaking was a fad that was also quite cathartic, although I don’t recall seeing anyone do it at the gas pumps.

Oh, and that long trip to Vermont you were planning? Well, fuhgeddaboudit! Instead, you now worried about running out of gas and getting stranded.

So the next time you find yourself being impatient, try to get ahold of yourself and know that “The only way genuine patience can be acquired is by enduring the very trials that seem so unbearable today” (F.B. Meyer).

“Rejoice in hope; be patient in affliction; be persistent in prayer. (Romans 12:12, HCSB)