During college, I had been appointed a music therapist internship at St. Elizabeth Hospital in Washington DC, a government run psychiatric hospital for treating the mentally deficient, the mentally disturbed, the deaf and blind, and those addicted to drugs and alcohol. During my stay, the hospital moved the patien

ts to a vacation camp in Prince William Forest, called “Camp Happyland”. No joke. Camp Happyland was run by the Salvation Army.

It was there that I befriended someone on staff who attended a small spirit filled church in Fairmont, Maryland. His name was Chuck. He asked me if I would like to attend one evening. I agreed to go.

“Lean On Me” by Bill Withers was the number one song on the pop charts. Not necessarily written as a religious song, it went on to become a popular Christian song depicting a God on whom we can lean and who would be our friend to help us carry on. Only God knew that I would need to lean on Him this particular evening.

At first, I felt uncomfortable attending the church service being it was so different from what I was accustomed to. I must have also stuck out like a sore thumb, as I envisioned myself a splotch of white paint on a canvas of black and brown, for I was the only white person in attendance. People were dancing in the aisles, speaking in a foreign tongue, and literally rolling on the floor (hence the name holy roller). I remember most clearly that someone was rolling from side to side on the floor while being purged of something hideous. Two women in long white dress, with hands raised, stood over him and were praising God. Foam appeared from the person’s mouth and washed over his body like I’d seen when the tide washes over a beach. See Mark 9:20. 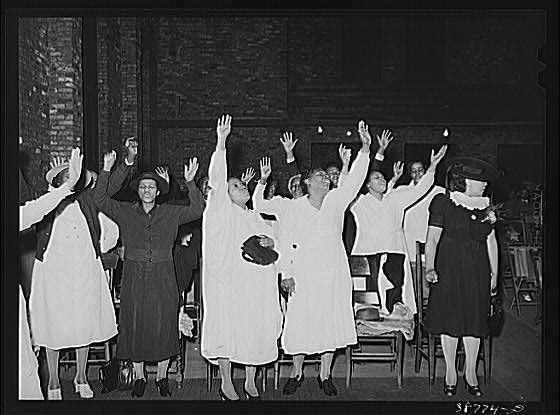 My friend Stan, who also accompanied me that evening, didn’t last 5-minutes. We both most probably scanned the walls of the church looking to see if anyone had handled snakes, afraid to find a list of the unfortunate deceased. Fortunately, we wouldn’t find any. Phew! But that didn’t stop Stan from looking for a way out. There was only one exit at the rear of the church, some infinite number of rows back it seemed. He took the keys to my car and made a beeline for the exit. He would remain outside until the service concluded.

The next week that I attended, “Lean on Me” was the number 2 song on the pop charts. I began to relax in God’s presence. No longer did I feel so uncomfortable. Perhaps the lyrics to “Lean on Me” echoed in my head – “when you’re not strong, I’ll help you carry on”. Pastor Williams — wearing dark sunglasses and singing his message to a jazz organist — stopped smack in the middle of his message and pointed his finger at me and Patty, my guest that evening. In his deep voice he said “You are going to have a good sleep tonight; one of the best”.

I had no idea what he meant, and neither did Patty. He then spoke Isaiah 56:7 at us – “These I will bring to my holy mountain and give them joy in my house of prayer”.  He then went on with his message, preaching and prophesying; not missing another beat.

After the service we drove for over an hour back to our camp in Virginia. With the two windows rolled all the way down in my 1968 Volkswagen Beetle, the wind tousled our hair and drummed our ears, nonetheless a relief from the oppressive heat of the night.

It was not until we arrived back at Camp Happyland that the realization of what the pastor had prophesied became evidence of the power from above. Every night was hot and humid with no air conditioning. On this particular day, the heat index reached 103.4.

I walked Patty back to her cabin and was just about ready to say “Good night”.  When she opened the door to her cabin, she found a  fan blowing. “Where did that come from?” she exclaimed. The cool breeze from the fan moved her curtains, and as she lay down, she would have the best sleep.

The next morning I learned that the fan was missing from the dining hall. No one seemed to know how it got to Patty’s room. Word spread, and there was soon an inquisition. I would be their number one suspect in the “Case of the Missing Dining Hall Fan”, despite knowing nothing about it. The fan was promptly returned to the dining hall where it belonged.

At the time, I didn’t know anything about God winks or Godincidences or God touches. We never did find out how the missing dining hall fan ended up in Patty’s room. To this day it is one of life’s “Unsolved Mysteries”.

Isaiah 56:7 was God’s way of affirming His holy presence to us. “Lean on Me”, God seemed to be saying, and “Be joyful, for you are in My house of prayer”. “For My house will be called a house of prayer for all peoples”, for all races and colors, and that included Patty and me, the only two white people in the congregation.

For many of us, God’s small miracles are a revelation that He exists, and that He cares for us. But it is also evidence of His power and His majesty. For Patty, who out of curiosity and with skepticism attended the service, it was evidence that God did exist.  Every so often you too may be reminded with a God wink, a God touch, a Godincidence.

The definition of Godincidence according to the Urban Dictionary is defined as “the obvious presence of God, in what classically has been termed coincidence, in which there is no plausible explanation.”