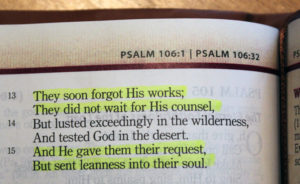 Those that will not wait for God’s counsel shall justly be given up to their own hearts’ lusts, to walk in their own counsel ….. And he gave them their request; but sent leanness into their soul (Psalm 106:13, 15).

Can you think of a time in your life when God has allowed you to walk into a storm because of your hard unhearing heart? Oh, the stress, the worry, the turbulence, and maybe even despair.

In 2001, the small company of 50 employees whom I worked for was acquired by the 5th largest corporation in the world. I was one of 12 people invited to move with my company. I was pleased that I was asked to be one of a chosen few, although I knew in my heart that it was the wrong decision to accept their offer of employment. Who was controlling my thinking? Who was directing my life? Was God ruling it or was I?

Had I lost sight of God because of my insecurity, fears, and worries about finding another job or was the promise of a significant pay increase my reason for not seeking God’s direction?  Probably a little of both; and so I reasoned that I could balance work and family and I accepted. Had I listened to God before making my decision to accept the offer; I might have spared myself months of distress. It would be 7-months later that my hard unhearing heart would be forced to listen.

Instead of a 40-minute commute to work, my 5:45 am commute was now two to three hours each way by car. On my trip to work, I sometimes found it necessary to pull over and close my eyes for 5-minutes so as not to nod at the wheel. The 20-ounce coffee usually helped, but a pit stop would always be pressing half way to my destination. This got old very fast.

By 5 o’clock I would need to be on the road again if I was to get home in time to relieve my daughter’s Nanny of her duties. Leaving on time was not frowned upon by the company, as long as I got my assignments done on time. However, it became too often that I would inquire when a project was due, the reply would be “I needed it yesterday.”  Unfortunately, yesterday was not the answer I wanted to hear. This too got old rather quickly.

I was overworked; I became depressed, did not sleep well, I was sick more than usual, and my marriage was strained. There was no peace in the middle of my pain. I dreaded going to work. Some days it was necessary for me to get away from my desk and stretch out in a recliner, draw the curtains closed and take a 20-minute snooze in what were called “nap rooms.”  For a growing number of companies across the country, sleeping on the job was encouraged as a way to increase productivity and ease stress.

I used to work willingly and without complaining, donating my off-time nights, weekends, and sometimes vacations, to pursue the company’s best interests and my own. However, there was one day when I cracked.

On a Monday morning in November, my director called me into her office.  “Please sit down Bill.” Now mind you, Gertrude was German. Germans are known for being very straightforward and goal-oriented. They also love rules, organization, and structure.  And, one more thing, they are punctual.  So, being too early (impatient) rather than on time is considered a virtue to them.

“Bill, we have three projects due this Friday that I would like you to complete,” she said.  I had now been with the company several months and had become apathetic and indifferent towards my job.  I was, as you say, burned out.  “That’s nice Gertrude,” I said.  “Pick one.”  I could see the surprised look on Gertrude’s face. “No, Bill, you misunderstand.  You have three projects due” she said.  “No, you misunderstood, Gertrude. Pick one” I replied.  I got up, left the room and closed her door.

Whatever got into me to be so bold?  Later that day, the Vice President of my past company that was acquired saw me passing his office and asked me to come in. “Bill, please shut the door.” “What’s up, Chester?” I asked.  “Watch your back,” he said.  “What do you mean?” I replied, playing dumb as if I didn’t have a clue what he was talking about. “I think you know,” he said, “just watch your back. You’ve ruffled some people’s feathers here at the company.”

I asked Chester if he thought there might be a layoff shortly, with severance pay, and he nodded his head affirmatively.  I asked him “do you think you can put in a good word for me to get me laid off?” knowing full well that he did not have to intercede on my behalf, not one iota of a bit. I was surprised when he replied “Yeah, me too.”

I knew my days were numbered at the company now.  In December, there was a twenty percent layoff, and I would count as one of them. Chester was also let go. For the next 1 ½ years I became a “stay at home mom” taking care of my daughter. I was glad for the time off and was not “bad off” financially especially with the severance package the company gave me. For me, having been laid off was a blessing in disguise, although I had to learn the hard way because I followed my counsel rather than God’s counsel.

That’s me in the middle

When I began journaling, almost a year ago now, it was for the purpose of recording God’s Word to me during a stormy period in my life, not to mention that Storm Sandy was also making havoc on the North East Coast.  Out of nothing else to do at that time, I needed a diversion; I needed something creative to do, but I could do little with a broken right wrist in a sling while cooped up inside during one of the Northeast’s worst storms of the century.  Electricity was out for nearly a week.  With little diversion, no electricity, radio or TV, I was fortunate during the storm, however, to have a gas generator that I was able to use sparingly to power a few things, one of which was to keep my smart phone charged. I knew I could not type except with my left index finger, so I used a voice recognition application on my smart phone to record my journal entries.  If you want to read more, read “Into the Storm” under the Be Encouraged category herein.

I began finding that writing in my journal was soul searching and healing.  It sustained me during a difficult period in my life.  It was a way for God to speak to my heart and keep me focused on Him.  It brought clarity to spiritual matters.  It was also a way for me to watch progress over the coming months; it was a way for me to look back at a time in my life, and then fast forward to a time and spiritual place where God had brought me since a time.  Some of the articles I share herein in Inspiration and Hope are a compilation of those journal entries.  Journaling continues to sustain me.  I highly recommend it to everyone who wants to hear God and know God more intimately.

I hope you find Inspiration and Hope as much of a blessing to read as I have found it to write.

For I am the Lord your God, who stirs up the sea and its waves roar (the Lord of hosts is His name (Isaiah 51:15).

It was the end of October 2012 that Storm Sandy caused much damage to the North East.  It was the second most catastrophic storm in US history, just behind Hurricane Katrina.  However, the storm was not just an atmospheric st

orm but also a personal storm for me.  It was a time that I could have relinquished to despair and blamed God for my misfortune, however, something miraculous happened.

(By clicking on Read more above, you will link to the posted article in its entirety, and which may be read by any reader that is able to read a PDF format such as with a Kindle device or your laptop.  All you need is a copy of the Adobe Acrobat Reader. Many computers already have it, but you may get it for free from http://www.Adobe.com).