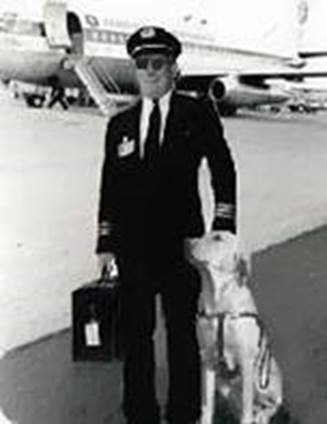 The following is a true story.
“A woman was flying from Melbourne to Brisbane …
Unexpectedly, the plane was diverted to Sydney.

The flight attendant explained that there would be a delay, and if the passengers wanted to get off the aircraft the plane would re-board in 50 minutes.

Everybody got off the plane except one lady who was blind.

A man had noticed her as he walked by and could tell the lady was blind because her Seeing Eye Dog lay quietly underneath the seats in front of her throughout the entire flight. He could also tell she had flown this very flight before because the pilot approached her, and calling her by name, said, ‘Kathy, we are in Sydney for almost an hour. Would you like to get off and stretch your legs?’

The blind lady replied, ‘No thanks, but maybe Max would Like to stretch his legs.’

When the pilot exited the plane with the lady’s Seeing Eye Dog, all the people in the gate area came to a complete standstill.
The pilot was even wearing sunglasses.
People scattered.
They not only tried to change planes, but they were trying to change airlines!

How many times have you jumped to a conclusion prematurely about something and were completely wrong? I would venture to say “a lot”.  Proverbs 25:8 says“Don’t jump to conclusions – there may be a perfectly good explanation for what you just saw.” – Proverbs 25:8 (MSG).

In the Book of Job, Job’s friends wrongly concluded that their friend Job suffered because he was being punished for sins he had committed, for they believed that God would not cause anyone to suffer innocently. But the Bible says that Job was a righteous man.

“Stop judging by mere appearances, but instead judge correctly” (John 7:24,). Do not be quick to judge based solely by a book’s cover.

Origination of phrase:
The phrase,“when I see a bird that walks like a duck and swims like a duck and quacks like a duck, I call that bird a duck”, is thought to have been coined by an Indiana poet by the name of James Whitcomb Riley (1849–1916). The phrase is sometimes referred to as the “duck test”.

The more common wording of the phrase may have originated during a labor meeting of the United Auto Workers in 1946 accusing a person of being a communist:  “I can’t prove you are a Communist. But when I see a bird that quacks like a duck, walks like a duck, has feathers and webbed feet and associates with ducks—I’m certainly going to assume that he is a duck” (Sentinel, John, September 29, 1946, “Communist Expose The Case of the Duck”).

Prayer: Lord, help me to not judge the worth or value of something or someone by its outward appearance only, but help me to look more closely before making judgment. 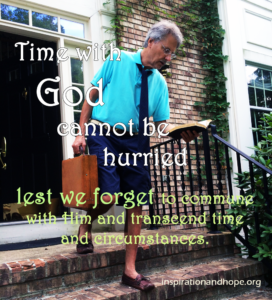 Forgive the cliché, but in a “fast food world” and in an America where men would like their cars fast from 0 to 60 in 3.9 seconds, I suppose many of us regard prayer in the same way. Fast is okay, we think. Let’s just get our prayer done and get the show on the road. Besides, God will understand. I am busy, and I will have fulfilled my daily prayer obligation.

How many of us actually think that way? I got up this morning, downed my cup of coffee, said a few prayers and was off to work. But hold on a minute! “I think I just blew past my exit”, or at least in the sense that I missed God’s exit. God says, “Time with Me cannot be hurried. When you are in a hurry your mind drifts aimlessly back and forth between Me and your tasks at hand”.

I recognize that prayer is often times difficult, especially when our thoughts are not focused on God to start with. My mind is running a mile a minute when I get up in the morning. But even with our busy schedules, God would ask, “could you not carve out from your busy schedule some time to pray to Me?”

Too many people I have spoken to, either because they are too busy or because they can’t focus, do not strive or persist at prayer and give up after 5 minutes. One person, I know, went to her pastor after trying to set aside a time to pray, and said to her pastor that it was too hard and that she was giving up. Here is what a mom was quoted as saying “Another race against the clock with only seconds to spare for a few “popcorn prayers” shot up to the Lord throughout one more busy day in the life of a mom” (2004, Welchel’s Busy Mom’s Guide to Prayer xii).

How many of us compensate, for lack of unhurried prayer time, by having “popcorn prayer time” or “flash prayers” throughout our day as a substitute? Please do not take this the wrong way because I believe sporadic prayers throughout the day are all well and good, for we are instructed to pray morning, noon, and evening; but I also believe God wants us to find some time alone with Him to pray. When we do, we will be filled with His Presence, peace, and joy.

God wants more than anything for us, to spend quality time with Him. And when we take the time to seek His face, only then can we commune with Him and transcend both time and circumstances.

Prayer: Lord, in my busyness, help me to stop and pray to You. Help me to set aside a dedicated time to You that is unhurried, a time that I can sit and listen to Your still voice without the clutter of busy thoughts.