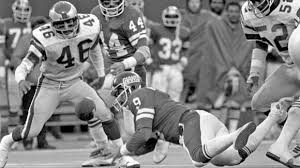 Ever had that “uh-oh” moment, that sinking feeling? We all make mistakes, and sometimes those mistakes lose games, so to speak. In our minds and hearts we often know what the right thing to do is because God speaks to us through our minds and hearts; but sometimes, our stubbornness, our self-sufficiency and self-reliance get in the way and cause us to listen to a contrarian voice. It’s “my way or the highway”. How many times have I made things worse because “I did it my way” or because I did not heed the promptings of the Holy Spirit or my heart?

It wasn’t just any fumble, it was “The Fumble”. There are only certain words that can describe the jaw-dropping sinking feeling that I felt when the ball was fumbled: anger, shock, despair, and disappointment. In a football game that will go down in history as one of seismic proportion was the game between the Philadelphia Eagles and the New York Giants, 1978. I was watching the game. The Giants were leading 17-12. All they had to do was take one more snap and kneel with the ball, and the clock would run out. It would be a huge upset over the Philadelphia Eagles that would put the Giants in a possible playoff picture if they won.

With 30 seconds to go in the game, Joe Pisarcik called the snap.
“Brown right, near wing, 65 slant!”
Pisarcik took the snap and went to hand it off to fullback Larry Csonka.

So, as the credits rolled on the television broadcasting system and Giants fans streamed out of the stadium with a seemingly sure 17-12 win, the unthinkable happened.

Sadly to say, the Giants did not win the game and would not have a chance at earning a berth in the playoffs. The play called for fullback Larry Csonka to take a handoff from quarterback Joe Pisarcik and run it in for a touchdown, but the play was botched with Eagles cornerback Herman Edwards picking up the loose ball and running it in for an Eagles touchdown instead. If quarterback Joe Pisarcik had only taken a knee, the Giants would have won the game.

Instead of jubilant celebration, there was a mood of despair and a sickening feeling that prevailed over the Giants and their fans. Angry Giants fans demanded that someone be held responsible for this debacle. Needless to say, Coach Joe Gibson was fired the next day. The “I did it my way” reasoning would have severe and lasting impact. So great was the stigma attached to this one decision that Joe Gibson made, that he would never work at any level of football again.

The play will always be remembered by the Giants as “The Fumble”. To this day, Joe Pisarcik is still asked about it. Joe is quoted as saying 35-years later, by Mark Di Ionno, columnist for the New Jersey Star Ledger, “People come up to me and actually say, ‘Hey, do you remember that play…?’ I feel like saying, ‘No, I’m only reminded of it 89 times day.”

Could Joe have reversed Joe Gibson’s play call? Well, what people don’t know, is that a couple of weeks before, Joe Pisarcik did change one of Coach Gibson’s plays and was severely reprimanded for it. According to Mark Di Ionno, Coach Gibson screamed at Pisarcik, “Don’t ever change a play I send in, ever again! Pisarcik said. So when the (fumble) play came in, the guys in the huddle were like, ‘Joe, don’t do it. Just fall on the ball.’ I said, ‘No way, I’m not going to get yelled at again.’”  Final score: 19-17, Eagles over Giants. Joe Pisarcik’s legacy would be sealed in stone forever.

One thing that we can learn from our “uh-ohs” is to do it God’s way the next time.  And when we do it His way, we will always come out the winner, for if Christ lives within us and we are in tune with His Holy Spirit, we will be victorious.

Prayer: Dear Lord, help me to be sensitive to the promptings of your Holy Spirit in matters of my heart and in making daily decisions. Help me to do it “Your Way”. When you feel stressed or encounter difficulties, do you let those stresses and difficulties alert you to your need for God, or are you quick to solve them yourself?

One Saturday morning during a Pause Ministry men’s meeting and breakfast, a title on the book shelf caught my eye. It was “The Complete Do-It-Yourself Manual”. Of course, this was a complete guide to fixing and maintaining anything and everything around your home. But it made me ask the question, “How many of us have that Do-it-yourself mentality when it comes to fixing that which is broken in our inner self? How many of us are quick to give advice or solve a problem before hearing God on a matter? How many of us do it “My Way” and not God’s way?

Some trivia – In 1968, Frank Sinatra recorded a song entitled “My Way”. It was also the title of a record album, for those of us who remember record players, and a song that hit #5 on the Billboard Hot 100 Chart. It became so popular that, just to name a few of the dozens of artists who recorded it, there was Elvis Presley, Paul Anka, Tom Jones, Luciano Pavarotti, Andy Williams, Gipsy Kings, David Bowie, and U2. The Three Tenors performed the song on July 22, 1996 during their concert in East Rutherford, New Jersey at Giants Stadium. The version by Elvis Presley even went Gold in the U.S with over 1,000,000 recordings sold.

And now, the end is here And so I face the final curtain
My friend, I’ll say it clear
I’ll state my case, of which I’m certain
I’ve lived a life that’s full
I traveled each and ev’ry highway
And more, much more than this, I did it my way.

Yes, there were times, I’m sure you knew
When I bit off more than I could chew
But through it all, when there was doubt
I ate it up and spit it out
I faced it all and I stood tall and did it my way.

For what is a man, what has he got?
If not himself, then he has naught
To say the things he truly feels and not the words of one who kneels
The record shows I took the blows and did it my way!

We are in a world today that stresses self-sufficiency. You can find almost any type of self-help literature for fixing things, but so few of us go to God first. Although self-sufficiency is acclaimed in our society, the “I can fix it myself” mindset does not bring the peace of God, nor does it bring abundant living in Christ.

Just out of curiosity, I did a Google search with the keywords “I can fix it myself”. The query returned a number of self-help book titles such as You Can Heal Yourself, or You Can Heal Your Life, and other mind over matter titles. All were definitive guides to managing our own spirituality and energy without God. Many of these titles can also be found by querying the keyword “spirituality”.  Spirituality, according to one definition, is the “progressive unlearning of the strange ideas about God you’ve been taught…”.

Another definition of spirituality and in a Biblical context, the term means being animated by God (Waaijman, 2000), to be driven by the Holy Spirit, as opposed to a life which rejects this influence (Wong, 2009).   Such spirituality emphasizes dependence on God. For those it is the belief that Jesus is the vine and we are the branches. If we abide in Him and He in us, we will be fruitful and productive and at peace in Him, for apart from His Way we can do nothing (see John 15:5). God did not instruct us to deliver ourselves from our stresses and difficulties and our brokenness. Rather it is God on whom we should set our hope, whom we should rely. It is He who will deliver us (2 Corinthians 1:10).

We are a society that is emotionally driven. Our decisions are a mix of our feelings and of our thinking, and because we are human, we are this way. “The mind is the most restless, unruly part of mankind” (April 21, “Jesus Calling”). The Bible, however, teaches that successful resolution of problems and difficulties is not the product of self-dependence, but instead the product of surrendering our difficulties to God, and by being grounded in biblical principles.

Prayer: Dear Lord, help me to come to you daily for deliverance from all my cares and worries, fears, and sorrows. Help me to rely on You for answers to life’s problems. Help me to do it “Your Way”.