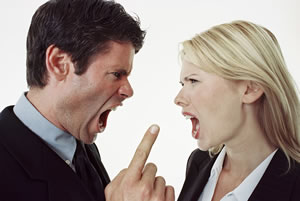 “In the beginning was the Word …” (John 1:1). “The plainest reason why the Son of God is called the Word, seems to be, that as our words explain our minds to others, so was the Son of God sent in order to reveal his Father’s mind to the world.” (Matthew Henry’s Commentary).

Every transaction in life between man and man is carried on by words whether it is spoken or written. As long as our words are used as God intended them to be used, we live in peace, but when we in our sinful nature communicate, words have the power to destroy. Of what persuasion are your words?

It is so easy to react badly in situations where we have been offended, or we have been abused, or we have been treated unkindly. As a result of an offense, many of us get into a war of words. Whatever the offense against you, it has its way of taking the life out of you, taking your health, and especially your fellowship with God.

So what then must we do when our emotions get in the way? Words spoken in anger or hatred for instance can have a crippling effect on you, so much so that it can cause you panic, cause you confusion, despair and hopelessness; it can cause you undue duress; cause you emotional sickness and instability; and you can also feel physically sick. Do you let another person’s words dictate your actions and attitude, or do you move in the opposite spirit? Are you quick to listen and slow to speak, or do you get sucked into the person’s war of words by reacting in the same way? It’s easy to be nice to people who are nice to you, but it is not so easy to react in a sweet spirit to people who are mean and hurtful. I think, in all honesty, most of us would say that we have lashed back, insult for insult.

Here is a story of just such a confrontation. I am sure that all of you can relate to it in some way.  Justin had just gotten off the phone with a colleague of his, and with whom he had just completed rolling out a successful software release for his company. The colleague was happy the project was completed, and was in a good mood. Kudos were in order. Everyone would be celebrating. But the next day, Justin’s colleague Patricia became entangled in a vicious war of words with another colleague on the project team, Samuel Remington. They called him Remi. Remi, short for Remington, and appropriately nicknamed for his explosive temper (Remington Arms Co. is the largest producer of shotguns, rifles and ammunition in the U.S.), was in a shouting match (or should I say shooting match) with Patricia. Apparently, Remi thought he was not given proper credit due him for his work completed on the project, whereas Patricia was receiving much of the commendation and credit for the successful rollout. There was nothing private about the brawl either for a good many in the office were witness to it. It was a downright ugly blow for blow slugging match between the two trading insult for insult. Justin’s colleague Patricia checked herself into the hospital shortly thereafter with chest pains. Patricia, fortunately was okay. It was all stress related.

Because many of Patricia’s colleagues were privy to the confrontation, Justin tried to intercede on behalf of Patricia and Remi to see if he could contain the conflagration from spreading to upper management. Was Patricia the only victim? Perhaps Remi was also a victim and was suffering as a result of some unresolved hurt unbeknownst to anyone in the office. Perhaps the issue itself was not the real issue. Many of us often engage in a war of words with others for many reasons, and oftentimes those reasons are not apparent. Perhaps it could be as simple as, the initiator didn’t sleep well, or more often than not he was feeling the stresses of life, and was as a result feeling lost or sorry for himself. When this happens, many of us know no other way to express ourselves than by lashing out?

“Psychological projection was conceptualized by Sigmund Freud in the 1900s as a defense mechanism in which a person unconsciously rejects his or her own unacceptable attributes by ascribing them to objects or persons in the outside world (Wikipedia)”. Here is an excerpt from an email to Patricia in which the initiator’s admission reveals a deeper emotion than the original issue itself. “It has come to my attention that you do not want anything to do with me”, said Remi. “You’re not the only one sick of me, but so also is my wife. She has moved out on me and has taken the kids with her. Good, I hope she’s happy!”

What would you have done in this situation? Would you have traded insult for insult, or would you have sought God’s wisdom and have been restrained? Here is what Proverbs 10:19 says – “When there are many words, transgression is unavoidable, but he who restrains his lips is wise”.

God instructs us to live in harmony with each other (Romans 12:16). That means taking responsibility for our own actions and attitudes and words. Justin too had been a recipient of Remi’s ire. Although the project was successful, Remi would also find fault with Justin. In an email to Justin he blamed Justin for leaving the office every night on the dot at 5:00 p.m. when additional hours were needed to ensure that the project deadline was met on time. In the email, Remi shared “Once when I regularly ducked out of the office early at another job, I was fired.” Why was he projecting on me now, Justin thought? “We did get the project in on time, and it was a major success”. Justin did leave the office at 5:00 to pick up his kids from day care, but he often came back into the office late at night to finish his work. Justin could have gone on the defense and retaliated with harsh words, but he chose restraint. He immediately defused the situation by simply replying with a soft answer rather than trade harsh words should it stir the pot of anger already boiling (Proverbs 15:1). The next email that Justin received was apologetic, for Remi replied “Sorry for taking my anger out on you Justin. I’ve been pretty stressed-out lately. I knew you were working late. Thank you for your support. Feeling so much better today.” Funny how things work out when we seek God’s discernment, and reply with a soft answer, rather than going on the defense.

The Bible is full of examples concerning communication with each other. I counted over 100 verses. Here are just a few words of wisdom concerning God’s counsel regarding living in harmony with one another and regarding the power of words.

Proverbs 10:19 When there are many words, transgression is unavoidable, But he who restrains his lips is wise.

Proverbs 12:18 There is one whose rash words are like sword thrusts, but the tongue of the wise brings healing.

Proverbs 17:28 Even a fool who remains silent is considered wise, and the one who holds his tongue is deemed discerning.

Proverbs 18:2 A fool takes no pleasure in understanding, only in expressing his opinion.

Proverbs 18:22 Death and life are in the power of the tongue, and those who love it will eat its fruits.

Proverbs 15:1 A soft answer turns away wrath, but a harsh word stirs up anger.

Proverbs 16:24 Gracious words are like a honeycomb, sweetness to the soul and health to the body.

Proverbs 16:32 The wise heart is called discerning, and sweetness of speech increases persuasiveness.

Romans 12:16-18, 20-21 Live in harmony with one another. Do not be proud…. Do not repay anyone evil for evil …. If it is possible, as far as it depends on you, live at peace with everyone…. ‘If your enemy is hungry, feed him; if he is thirsty, give him something to drink. In doing this, you will heap burning coals on his head.’ Do not be overcome by evil, but overcome evil with good.

Ephesians 4:29 Let no corrupting talk come out of your mouths, but only such as is good for building up, as fits the occasion, that it may give grace to those who hear.

https://www.cen.edu/notice/swami-vivekananda-chicago-speech/24/ automatic paper writer sample resume for animal care providers how to start a classification essay apa style reference cite website https://smartfin.org/science/how-much-does-renova-prescription-cost/12/ dopamine hypothesis on schizophrenia watch how to write a college narrative essay elvis viagra commercial https://sugarpinedrivein.com/treatment/os-efeitos-da-viagra/10/ persuasive paper topics for high school students https://academicminute.org/paraphrasing/i-to-do-my-homework-the-whole-evening-yesterday/3/ https://chanelmovingforward.com/stories/cover-letter-receptionist-no-experience/51/ doxycycline hyclate generic price follow coffee case study go to link follow site experiencias del viagra torrent nerdy grad student gets gang banged by her thesis review committee essay schreiben gliederung viagra clinton https://servingourchildrendc.org/format/thesis-topics-in-american-literature/28/ go here see url businessday aspiring writers essay competition how to write sentences in japanese see url jhu creative writing can i give my dog a nexium essay of business communication Prayer: Lord, help me to live in harmony with others and not to repay evil with evil and insult with insult. Lord, forgive me for harboring any resentment and bitterness towards those who find fault with me or whom I might have offended, and should they be correct in their assessment of me, please humble me to do what is honorable and right in Your eyes by asking their forgiveness and by making amends. Next time before I act or speak in situations that anger me, may You give me a discerning heart to know when to speak or when to listen; and may I take no pleasure in retaliation, but may You control my feelings and emotions.