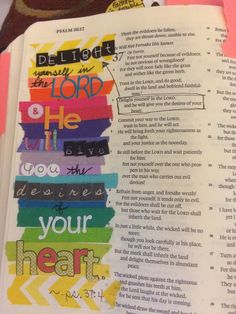 “Delight yourself in the Lord, and He will give you the desires of your heart” (Psalm 37:4)

The following thought-provoking questions are shared from a page on Facebook called Shareable Truth (August 25, 2017).  I gained a new perspective on this frequently cited and often misunderstood passage in the Bible.

Many seem to think that Psalm 37:4 means that God will give us everything that we ask for; a job prayed for, a bigger house, a new car, or perhaps a husband or a wife. Sometimes he does give us our desires, but that is not always true. Sometimes we are sorely disappointed when God seemingly turns a silent ear. You might ponder then, if God is supposed to give me the desires of my heart, then why was I passed by for promotion, or why am I still single?  We often then become very introspective and frequently find blame when things don’t turn out as expected (desired).  “Have I not delighted in you Lord?”  “Did I do something wrong?” The answer, however, may be simply, your longings were never His will nor His desire to start with. But that is also not to say that your longings are not His desire, or that He will not give you the desires of your heart. Your longings may just not have been fulfilled yet according to His perfect timing and perfect will. Lord, help me to accept your will.

Let’s take a closer look at this verse. First, it says that we are to delight ourselves in the Lord. Taking delight in the Lord means that we find peace and fulfillment in the Lord, and we take pleasure in Him.  But it doesn’t mean that if we go to church every Sunday that God will give us that big house you’ve always dreamed of having, or that beautiful red Lamborgini.

Secondly, it says He will give you the desires of your heart. Many delight in temporal things, wealth, status, and material things of this world, but outside of God’s will, it is futile to think that we will ever achieve complete satisfaction and joy from those things. This is the bane of our worldly existence. However, when we commit our future to the Lord and trust in Him, He replaces our desires with His desires, his majesty, glory, and love so that we want nothing else. Have you first asked God what his desires are for you?

So here are some steps for satisfying every desire of your heart in Himself (not in myself).

And so, when you delight yourself in the Lord, and you own His desires as your desires, “He will give you the longings of your heart,” and you will be so satisfied in the Lord, that you will delight in nothing else, for His desires are our desires. That’s what I want. Having that translates as inexpressible and glorious joy and a life of contentment. 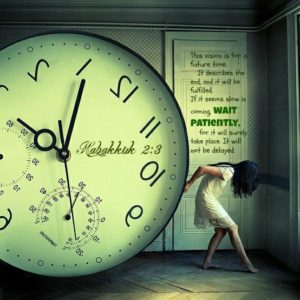 Have you prayed and prayed for something, yet there was no manifestation?  How often did you not wait for the fruit to ripen, often insisting on picking it while it was still green? Of course, you have. The demand for instant results has permeated our society.

As an example, you have a meltdown while waiting on the phone listening to an automated message. In your frustration, you scream at your phone and proceed to hit the “0” button repeatedly until a live person answers.  In 2003, the Journal of the American Medical Association linked impatience to increased risk of hypertension among adults.

Or perhaps you have grown impatient while waiting in lines. Recently, while I was standing in a long checkout line at the grocery store, the checkout process seemed to take too long, so I switched to another line. Ironically, I picked the wrong line. The person who took my place in the line that I had just left, checked out before me.

Surely, these are harmless examples, but what if you hastened the end-result, and adversely changed the intended outcome? One such example in the Bible was of Abraham and Sarah; they did not wait for God to give them the son that He had promised (Genesis 16:1-2).

“God moves in His timing, not yours. He is never late, but He is usually not early either. He is often the God of the midnight hour. He sometimes waits until the last second before He gives you what you need. Before He intervenes on your behalf, He has to be sure you are not going to take matters into your own hands and do something out of His perfect timing. You must learn to trust God’s timing. But first, your self-will and your spirit of independence must be broken so that God is free to work His will in your life and circumstances. If you are waiting for something, set aside your own timetable tonight. Trust God and believe that while you are waiting for your breakthrough, He is doing a good work in you for His purpose.“[1]

In Jeremiah 29:11-14 it says that God knows the plans he has for you, plans for well-being and not calamity, plans to give you a future filled with hope.  And when you call upon Him, it says that he will listen to you. And if you seek Him with all of your heart, it says that you will find him.

Wait patiently, therefore, for it surely will take place.  Wait patiently for God’s promises because he will not disappoint those who seek him with all their heart.  “It won’t be a lie. If it’s delayed, wait for it. It will certainly happen. It won’t be late.” (Habakkuk 2:3, GOD’S WORD Translation). 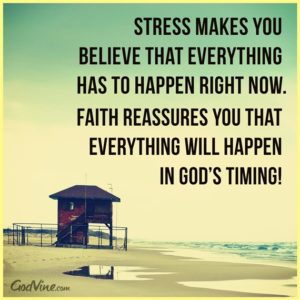 When has your tomorrow become today because you just couldn’t wait?  Stress can do that to you. Stress makes you believe that everything has to happen right now.

As an example, there is nothing wrong with companies selling more and faster, but often mistakes are made when they do not weigh the risks of a faster turnaround against releasing a product on schedule.  I recall a time when my company couldn’t wait for tomorrow and nearly cost our customer hundreds of thousands of dollars in lost sales due to a reckless and hasty decision. It was as the cliché goes – “egg on your face”.

I was the Quality Assurance Manager of that small software company.  I was always thorough in testing a product for release, but sometimes there was the pressure to make a product release sooner than the planned release date. Best case scenario was that we would just have to work longer hours and weekends to get the job done, but it would be at least tested. The worst case scenario case was that we would release a product that was not thoroughly tested, and that could bring the customer’s systems to a crashing halt, as in the following case.

Worst case scenario – I received an urgent call from our customer when I came into work one morning. Unbeknownst to me, a software enhancement request had been fast-tracked “out the door” for a minor bug fix, sooner than the next planned release date. I was not kept in the loop, and as it was prematurely released without my knowledge of or testing of it, I was in a quandary as to why their computer systems were down.

Stress levels, as you can imagine, were very high, so I logged on remotely to the customer’s database to diagnose the reason for the system crash.  My mind was whirling. Was it my fault that their systems were down?  It had also crossed my mind that it may not have been my fault, which perhaps the customer had not provided me with a complete set of test data for running successful tests in-house. In either case, we would have to work overtime until the problem was fixed.

Because of the dire emergency of their systems being down, I now had to escalate the problem and involve our Vice President.  Seemingly embarrassed, he said, “Oh, I released the product to them last night. I didn’t think that a simple bug fix would be a problem. ”

Fortunately, we were able to back out the bad release and restore the last good release so that the customer’s system was back up and running.

Whatever the negatives of not having a new product release over having an emergency release, a risk assessment should have been made to decide if the risk of releasing it sooner outweighed the risk of having it later.

“What good has impatience ever brought? It has only served as the mother of mistakes and the father of irritation.” ― Steve Maraboli

Similarly, when we are tossed and perplexed with doubts about what God is doing in our lives, we must watch against the temptation to be impatient.  When we have poured out our requests to God over and over, stop to listen to his word and spirit about what he should say to us, for much trouble in life is because we don’t wait upon God to answer our hurry up prayers. In turn, we fail to receive God’s blessing because we are not moving forward with Him.

Don’t try to control destiny by making tomorrow happen today. “If it seems slow in coming, wait patiently, for it will surely take place.” (Habakkuk 2:3, NLT).